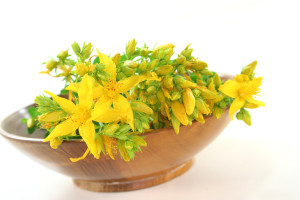 Hypericin is obtained from St. John’s wort (lat. Hypericum perforatum) and is a powerful naturally occurring photosensitizer. The (PDT) is used in the treatment of cancer in photodynamic therapy. There is a red fluorescent photosensitizer with absorption maxima at 550-558 nm and 330 nm in hypericin.

Even in ancient times the reddish oil of hypericin was applied externally to promote wound healing. Today hypericin is mainly used in the field psychovegetative disorders.

The side effect of hypericin intake is that the photosensitivity of the body is increased. This effect is used in the modern treatment against cancer in oncology. The fluorescent hypericin increasingly accumulates in cancer cells. The reasons for a high accumulation of hypericin in tumor tissue lie in the structural, as well as the physiological characteristics of a cancer cell.

In the field of molecular mechanisms in cancer cells, studies have shown that the excitation of the laser of photodynamic therapy (PDT) leads to photocytotoxicity in cancer tissue by means of a specific wavelength for hypericin. Toxicity to cancer cells is caused by the reaction of the photosensitizer with oxygen-hypericin. Products of the chemical reaction are toxic oxygen radicals, which enable cancer cells to apoptosis and necrosis.