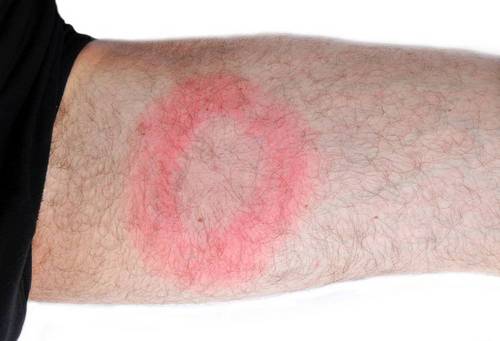 Lyme disease is an infectious disease caused by the bacterium Borrelia burgdorferi of ticks, horseflies or mosquitoes through a bite or sting. Against the Borrelia infection, which is transmitted mainly by ticks, lurking in the long grass, there is no vaccine, unlike the viral disease TBE (tick-encephalitis). Depending on weather conditions most infections occur March to October.

After several days you often find an annular erythema at the initial bite wound of the tick, called the eye rash (erythema migrans). In the first stage the Borrelia infection can be treated with antibiotics, because the spirochetes are still in the blood and are easily accessible for antibiotics.

As this eye rash does not always occur, the first stage is often overlooked. Observable physical symptoms, such as fatigue, headache, heart rhythm disturbances and fever, patients often interpret as gripal infect. Proper diagnosis of the disease does not occur.

In further stages it happens that the spirochetes, who dislike the heat, retire to peripheral tissues, such as joint capsules and ligaments, where among other things spontaneous ruptures may occur. If Lyme disease merges in this chronic stage, patients often have a long ordeal to go before they can be helped medically.

There is often no evidence of an infection with Borrelia in the blood, and the spirochetes, that have retreated to the cells, are difficult to be hit by antibiotics. In addition the Borrelia can mimic any disease, which additionally complicates diagnosis. The Borrelia infection develops very slowly in the body and often only after several months or years different forms of Lyme disease can occur. Various organs such as the skin, the nervous system and joints can be affected by the Borrelia.

The worst symptoms are:

According to a study by the Max Planck Institute Borrelia die at a temperature from above 41.6 degrees Celsius. The thermal instability of Borrelia was detected in 1996 in a Scandinavian study, which showed that at 41.6° C all Borrelia strains were dying.

This knowledge we use by administering the whole-body hyperthermia.

Patients are lying about two to three hours on a lounger, completely enveloped by a tent, exposed to a body temperature of 41.6 to 41.8° C. During this time they are monitored intensively by medical staff.

At the same time the elevated temperature activates the endogenous macrophages (phagocytes and killer cells), which can then eliminate the bacteria.

This method has to be applied one to two times. In our clinic we offer this method in a holistic approach in order to eliminate the neurotoxins produced by the Borrelia by a special detoxification program.

For more information about the different diagnostic procedures and
alternative, biological or complementary  therapies